Tuesday, we had the honor of taking the cast of Buddy - The Buddy Holly Story to Graceland. We love everything rockabilly so we were extremely excited to meet the people who bring this wonderful musical to life on stage. Hopefully we hid our over-enthusiasm fairly well!

The tour – led by Backbeat’s own rockabilly superhero, Brandon Cunning – started off with a bang. There was some great harmonizing to Blue Suede Shoes – a salute to our hometown boys, Carl Perkins and Elvis Presley. As much as we love the Texas-born Holly, we do live in Memphis after all, so we could hardly resist a little friendly competition. It was some of the best singing and rhythm our bus has ever seen – I don’t thnk we’ve ever had more talented passengers!. My favorite part of the day, though, was when the cast joined Brandon to sing the Holly hit Oh Boy. Check out the video!

The tour was a treat for Brandon, who grew up listening to Elvis, the Ventures, Bo Diddly, and yes, Buddy Holly. He and his band, the Stunning Cunning Band, regularly perform Holly tunes such as Oh Boy, That’ll Be the Day, Maybe Baby, Rave On, I’m Looking for Somebody to Love, and others in their Beale Street shows. (Brandon’s favorite Holly song? Raining in My Heart.)


Brandon and I both had a chance to meet lead actor Todd Meredith, who is reprising the role of Holly in the national touring company for his fourteenth time. (The musical originally opened in London in 1989.) Meredith has been a fan of Holly for most of his life and has his own tribute band to Holly called “The Rave-Ons.” Click here to check out this footage of Meredith’s personal tour of Graceland led by one of their archivists. 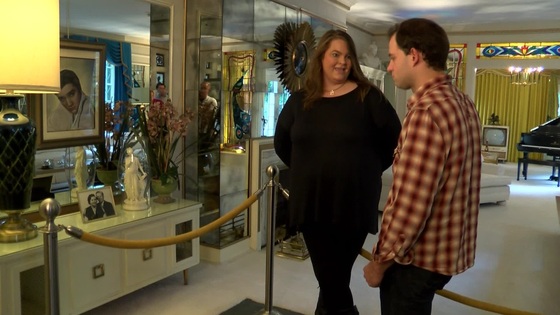 Later that night, many of our Backbeat staff members, all ardent Holly fans, went to see the opening night performance of the show. If you like jukebox musicals that grab you by the heart and make you want to get up and dance, then this is the show for you! The story follows the life of young Holly from his early days in Lubbock, Texas, to the formation of his band, the Crickets, and the development of the unique Holly rockabilly sound. The highlight of the first act was a recreation of the Crickets’ legendary performance in Harlem at the Apollo Theatre, where the band was mistakenly booked by someone who thought they were African-American. The cast’s performances of Oh Boy, Peggy Sue, Words of Love, and Shout got me dancing in my seat.

It was the second act’s recreation of the Winter Dance Party Tour, though, that really captured my heart. It featured what would end up being Holly’s last performance. By this time in Holly’s career, Buddy had split with the Crickets and met and married the love of his life, the Puerto-Rican beauty Maria Elena Santiago. Along with him on the tour were the Big Bopper, played by Greg Kalafatas, and Ritchie Valens, played by Danny Caraballo. Kalafatas and Caraballo did rousing renditions of Chantilly Lace and La Bamba, but it was Meredith’s performance of Johnny B. Goode that brought the crowd to its feet, singing and dancing along with the cast. 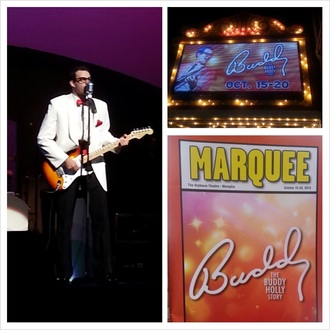 We’ll never know what might have happened had Buddy Holly not taken that fateful flight to Minnesota in the winter of 1959. Though we can’t take back that night, at least we can relive Holly’s memory with this great musical. It’s not too late to get your tickets! The show runs through Sunday, October 20, at the Orpheum. See below for ticket information.
Posted by Deborah Patton at 5:17 PM