A Visit To The Memphis Tattoo Arts Convention

This past weekend, Backbeat Tours visited the Memphis Tattoo Arts Convention, which made its debut at the Cook Convention Center in downtown Memphis with all the colour and edge a visitor might expect from some of the most popular body artists in the world. Brought to Memphis by body art promoter Troy Timple of Villain Arts in Philadelphia, the convention featured 150 tattoo artists from all over the US and Canada, and as far away as Japan. 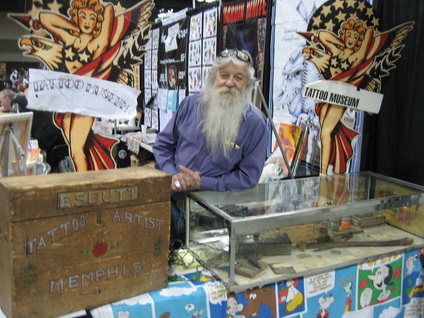 “I’ve been hosting tattoo conventions for about 15 years now,” Timple said. “[I] decided that Memphis was a city I really had an interest in. It's my birthday weekend and I thought: You know what? I'm going to get the Rev. Horton Heat to play for my birthday and I'm going to go down to Memphis and have a time.”

And a time was had. Along rows of booths decorated with shop posters, pin-up art, and thousands of designs, visitors were treated to the artists’ artwork, tattoo contests, a tattoo museum collection, and fashion accessories—including such items as leather wallets embossed with the likenesses of Nicolai Tesla and Burt Reynolds.

"Even if you're not getting a tattoo, it's quite the thing to behold,” Timple said.

Among the ubiquitous hum of tattoo machines, visitors were given a rare opportunity to meet and be tattooed by body art celebrities like James Vaughn, runner up from the second season of Spike TV’s “Ink Master,” Alli Baker from the Oxygen Network’s “Best Ink,” and Amy Nicoletto from TLC’s “LA Ink.” Tattoo legend Philadelphia Eddie was also on hand, and there were sideshow performances by the Show Devils and the Inklusionits.

Memphis’ own Trilogy Tattoos was there as well, greeting customers and giving tattoos. Co-owner Richie Jarvis pointed out that Memphis is a natural choice for hosting a convention of this kind.“ People don't realize the talent of the tattoo artists that are in the city of Memphis,” Jarvis said. “We’ve got some incredibly talented artists. And the majority of them don't come from a tattoo background: they come from an art background.” 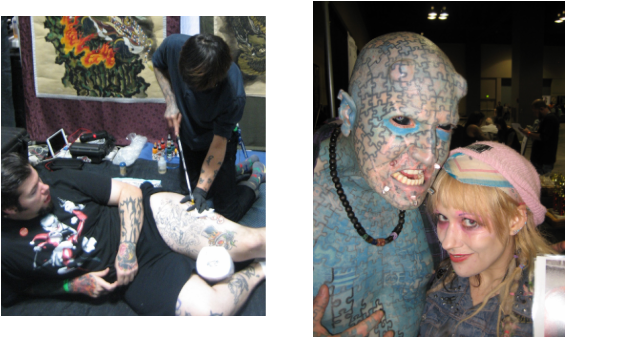 But what really excites Timple and Jarvis both is perhaps the most important factor in today’s body art industry: acceptability. In the last 15 to 20 years, body art – including tattoos and piercings – has made tremendous strides in mainstream acceptance, according to Jarvis.

Timple has a similar perspective. “Our tattoo shop shirt over at Philadelphia Eddie's says: "Tattooing Sailors and Whores Since 1952,” he said, pointing at a t-shirt being worn by an employee. “Back in the 1950s, tattooing was for the tough guys—you know for bikers, sailors, thugs.” “I make the joke,” he added, “that [today] I tattoo the criminal, and I tattoo the cop that locked him up—then I tattoo the lawyer that got him off. You know it's quite a colorful cross-section of humanity and it's really entered into a common part of our society.” But for tattoo professionals like Timple and Jarvis, that people are getting tattoos is just as important as the artists making them. “Being able to produce tattoos on people is the strongest form of pure art,” said Timple, “because it's something that's so personal to people…it’s a part of their lives that can’t be taken away.”

With the rise in popularity and acceptance of tattoos, and the talent of the artists creating them, an annual body art convention in Memphis seems like a good thing to bet on seeing again next year. But while the tattoo business seems to be changing forever, it doesn’t come without a little regret for old school tattoo fans like Timple.

“I think that the negative stereotypes of tattooing being just for sailors and whores is sadly going away,” he said with a chuckle. “I liked it when it was just us tough guys.”

What do you think? Should tattoos be for tough guys only? What’s your favorite tattoo artist in Memphis?
Posted by Deborah Patton at 5:30 PM

Oh my goodness, this visit to The Memphis Tattoo Arts Convention seems just so fun and memorable. All of these details have left me speechless. Well, I also would love to attend upcoming arts event that is going to be organized at a local convention center. There will be loads of arts and crafts presented by small scale home based business owners.

I really loved reading this article..
Thanks for sharing such a amazing post with us.
tattoos in gachibowli
tattoos in kondapur