The Woodruff-Fontaine House is reputed to be one of the most haunted places in Memphis, so as a ghost hunter and lover of all things historic, I couldn’t resist exploring the mansion for the Backbeat Tours blog this Halloween. Arriving at the lovely French Victorian home, with its Mansard roofs, arched windows, and colonnaded porch, I was swept into a more elegant era, one of bustles and corsets, tea parties and salons. Underlying all that shininess, though, was a complex romanticism of death.

Knowing all this, I shouldn’t have been surprised at the level of paranormal activity in the house, but my two hours touring the house with Ms. Elena Williams brought chills to my spine. According to Ms. Elena, the same could be said for the crew of SyFy Channel’s Ghost Hunters, who had investigated the house just a few weeks prior. The episode is scheduled to air in January. 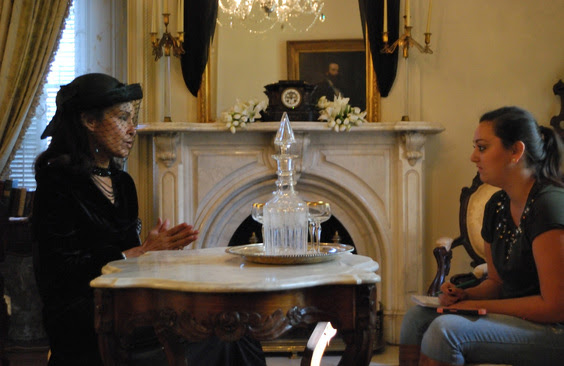 Ms. Elena made quite the first impression, with her soft, feminine manner and rich Southern accent. Dressed in black Victorian mourning attire, she could have been a ghost herself, she seemed so otherworldly. Ms. Elena, however, was quite human, a board member and former president of the Association for the Preservation of Tennessee Antiquities (APTA), the organization that restored the home and continues to maintain it.

We sat down on antique furniture and began our interview in the parlor, which was adorned with the black fabric hangings that would have been de rigeur on the passing of a loved one, all for the home’s current exhibit Mourning Memphis. I asked Ms. Elena to tell me about the home’s most famous ghost, Mollie Woodruff. Ms. Elena explained that Mollie, the daughter of Amos Woodruff, was married in the home to the first of her two husbands. Mollie never had a child that survived to adulthood despite three miscarriages and a stillborn baby.

Mollie’s bedroom, the Rose Room, so named for the rose patterned paper that decorates the walls, is frequently the site of spirit activity. Guests touring the mansion may see the rocking chair move, feel a drastic temperature change, or see the bed sheets rustle. Ms. Elena pointed out that some days they have to smooth the sheets multiple times, even if no guests have gone upstairs. Lights turn on and off by themselves in the rose room and throughout the house on a regular basis.

But the goosebumps began when Ms. Elena told me about her experience with another ghost, Elliott Fontaine. One afternoon at dusk, she came up to the house to double-check everything for a big tour group that was coming through the next day. She figured that, if anything spooky were going to happen, it would be in Mollie’s room. Nothing out of the ordinary occurred, so she made her way up to the third floor. As she came up the staircase, there was man sitting at the foot of the stairs to the fourth floor tower room. “It was very… I don’t know what the word is beyond frightening,” she said. Initially she thought it was a guest that had been locked in the museum after closing. The man was completely lifelike, not translucent as some spirits are. She then realized it was an apparition of Elliott Fontaine, the son of the second family to live in the mansion, whom she recognized from photographs. Ms. Elena closed her eyes, opened them, and he was gone. It was, she said “so frightening. Your mind can’t believe what your eyes are seeing.” 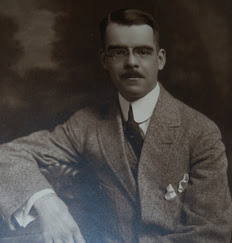 Yes, the spirits at the Woodruff-Fontaine continue to be extremely active. According to Ms. Elena, the Ghost Hunters crew said the house was one of the most haunted places they had filmed. So when you visit the house – and I HIGHLY recommend you do – just make sure to say hello to Elliott and Mollie. You are a guest in their home, after all.

The Woodruff-Fontaine House, 680 Adams Ave., is open for visits Wednesday through Sundays noon to 4pm. Coming this December, don’t miss the Dead Poets’ Society Dinner, where guests dress in costume and entertainers portray dead poets of the past. For details visit www.woodruff-fontaine.com, or call 901-526-1469.
Posted by Deborah Patton at 5:36 PM