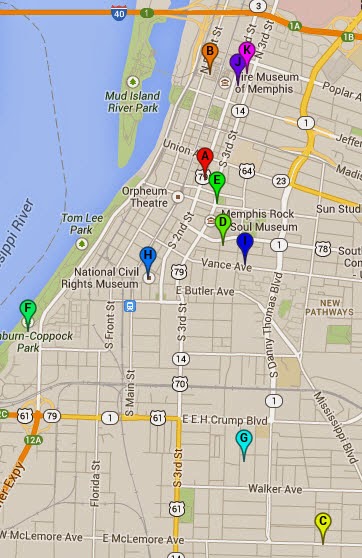 The 1968 Sanitation Workers' Strike, culminating in the assassination - 46 years ago today - of Dr. Martin Luther King, Jr., shook Memphis and the nation to the core. For 65 days, as winter slowly gave way to spring, our city was gripped in a bitter struggle, a struggle not just about better working conditions or higher wages, but about fundamental notions of justice and human dignity. "I AM A MAN," the placards said, and this simple, powerful message still resonates today.

It is an epic American story, sweeping in scope, and it happened here in Memphis. The following is a do-it-yourself tour of the places where these historic events occurred. Take the time to visit these sites and capture a glimpse of the past. Some are lost, some have changed, but a surprising number have endured. The story they tell is worth hearing.


If you can, join us on April 6 at 3pm for a special African-American Heroes Tour that tells the story not only of the strikers and the Civil Rights leaders who supported them, but also of the long struggle for justice and equality that has defined the African-American experience. 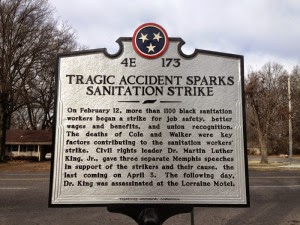 Cole, 36, and Robert Walker, 30, were crushed to death in the back of a sanitation truck on February 1, 1968. Though city flags flew at half mast for them, their families received no death benefits other than one month's salary, not even enough to pay for the funerals.

A. The strike begins: Memphis Labor Temple, 126 S. Second St. (now Peabody Place mall). On Sunday evening, February 11, 1968, more than 700 sanitation workers packed into the Labor Temple to discuss their increasing frustration with working conditions. The workers had been enduring poverty wages and poor equipment for years, but it was the February 1 deaths that spurred the workers to demand better treatment. When AFCSME union president T.O. Jones reported back that the city had refused to address workers' concerns, someone shouted, "He [Director of Public Works Charles Blackburn] gives us nothing, we'll give him nothing!" The next day, 1,100 of the 1,300 city sanitation workers walked out.


United Rubber Workers (URW) Local 186, 1036 Firestone Ave. (north of map area). On Monday, February 12, the sanitation workers held their first official strike meeting. So many workers showed up at the Labor Temple that the meeting was moved to a larger hall at URW Local 186 near the Firestone Factory. Daily mass meetings would occur here at noon each day throughout the strike, with afternoon marches to City Hall - a five-mile walk.

B. City Hall & Civic Center Plaza, Main St. between Poplar and Adams. City Hall held the offices of Mayor Henry Loeb and the city council chambers. Dozens of marches and demonstrations occurred here throughout the strike. On February 23, police attacked strikers on Main Street nearby using mace. On March 5, more than a hundred strikers and their supporters staged a sit-in inside City Hall after a compromise proposal was rejected by Mayor Loeb. On March 8, after several union leaders were jailed, strikers staged a mock funeral in Civic Center Plaza for the "death" of freedom in Memphis.


C. Centenary United Methodist Church, 584 E. McLemore Ave. The largest black Methodist church in Memphis, it was led by Rev. James Lawson. Lawson served as chairman of the strike committee and was a major figure in the civil rights movement. Dr. Martin Luther King, Jr. called Lawson "the leading theorist and strategist of nonviolence in the world." It was at Lawson's request that Dr. King came to Memphis to dramatize the workers' struggle against the city.

D. Clayborn Temple, 280 Hernando St. The church became an informal community headquarters during the Sanitation Strike and was the launching point of several important marches. On March 28, Dr. King came to Memphis and led 15,000 people from Clayborn Temple to City Hall in what was supposed to be a nonviolent demonstration, but the march ended abruptly with violence breaking out on Beale Street. The police attacked the crowd on the street and pursued marchers back here to the Temple. Demonstrators fought with the police outside, while others sought refuge inside. Police fired tear gas through the doors of the Temple; it is said that the marks from the canisters can still be seen on its walls. Hundreds were arrested, over 60 injured, and one person was killed in the rioting that went on across the city through the night.


E. Beale Street and the March on City Hall. March 28, 1968, was a major turning point of the Sanitation Strike, a watershed day setting into motion a chain of events that would culminate in Dr. King's assassination at the Lorraine Motel less than a week later.

Strike supporters had organized a march to start at 10am from Clayborn Temple, to proceed north on
Hernando Street (today that part of the route would pass through the FedEx Forum), turning west on Beale Street, then north on Main Street to City Hall. It was a beautiful day, bright and sunny, with temperatures in the mid-60s. After a late start, Dr. King began the march, linking arms with Rev. James Lawson and other local leaders; estimates of the size of the crowd behind them varied from 6,000 to 20,000. As Dr. King and the head of the column turned onto Main Street from Beale, they heard behind them the ominous sound of breaking glass. Marchers in the back, fueled by the frustration of the previous months, used sticks, pipes and bricks to smash storefront windows on Beale. Looting ensued and the Memphis police, ready for trouble, moved in with mace, tear gas, and nightsticks. Fearing for Dr. King's safety, Rev. Lawson ordered King's bodyguards to remove him from the scene immediately. 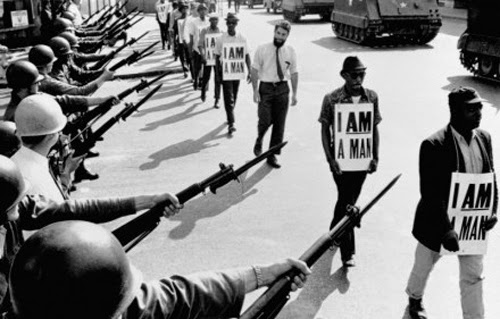 The next day, March 29, 300 sanitation workers and ministers marched silently along this same route under the bayonets of the National Guard. On April 8, four days after Dr. King's assassination, his widow, Coretta Scott King, led over 20,000 marchers along the route in the peaceful march that King had intended.

F. River Tower at South Bluffs, 655 Riverside Dr. Now luxurious high-rise condos, this was the location of the Holiday Inn Rivermont, where Dr. King was taken after rioting ensued on Beale Street during the March 28 march. Dr. King - against his will - was whisked into a car at Front Street and Peabody Place (then called McCall Ave.) to the hotel. In the weeks that followed, stories in the Commercial Appeal and elsewhere blasted King, the "prophet of the poor," for "fleeing" to the luxurious Rivermont while chaos broke out in the city. To burnish his image, King insisted on staying at the Lorraine Motel on his return, despite increasing concerns for his safety.

G. Mason Temple, 938 Mason St. Dr. King returned to Memphis in early April to try again for a peaceful march. On April 3, the evening before his assassination, King gave his famous "Mountaintop" speech. The speech primarily concerned matters relating to the strike, but towards the end, while a thunderstorm raged outside, King referred to threats against his life with words that seemed to foreshadow his impending death.


Like anybody, I would like to live a long life. Longevity has its place. But I'm not concerned about that now. I just want to do God's will. And he's allowed me to go up to the mountain. And I've looked over, and I've seen the Promised Land. I may not get there with you. But I want you to know tonight that we, as a people, will get to the Promised Land.


H. Lorraine Motel, 406 Mulberry St. The Lorraine Motel, owned by Walter Bailey and his wife, Lorene, was the premier African-American hotel and motel in Memphis. When Dr. King and his right-hand man, Ralph Abernathy, checked in here in April, they were given their usual room, Room 306, the largest in the motel. Abernathy remarked that they had stayed in that room so often during their visits to Memphis that it was jokingly referred to as the "King/Abernathy Suite."

On the evening of April 4, King planned to attend a dinner at the home of a local minister. In an upbeat  mood, dressed for dinner and waiting for Abernathy to join him, he wandered out onto the balcony, joked with some of his staff and spoke briefly to associates in the parking lot below. Seeing horn player and bandleader Ben Branch, who was to perform at a rally later that night, King called down to him, "Play Precious Lord tonight, will you? Play it really pretty." Moments later, at 6:01pm, a single shot rang out ("like a stick of dynamite," in the words of a witness), and King fell. Rushed by ambulance to St. Joseph's Hospital (where St. Jude's Children's Research Hospital now sits), King was pronounced dead within the hour. 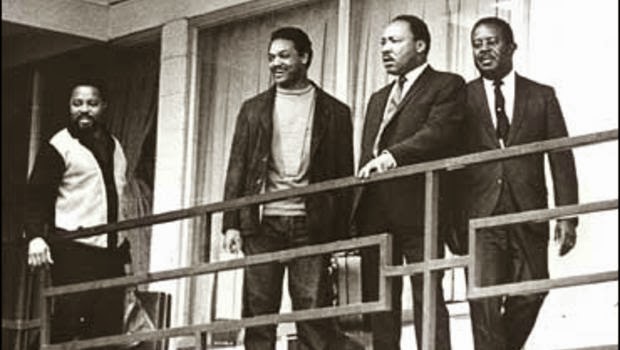 Fire Station No. 2, 474 S. Main (across Mulberry St. from the Lorraine Motel). The area around the Lorraine swarmed with FBI agents and Memphis city police in the days leading up to the assassination. Law enforcement agents kept watch on Dr. King from a small hole in newspaper plastered across the windows of the Fire Station overlooking the Lorraine. Their role was to see who King met with and watch for signs of an impending riot, not to protect King.

Young & Morrow Building, 422 S. Main (in front of the Lorraine Motel). In 1968, this building housed the Canipes Amusements Company. A restaurant called Jim's Grill occupied the building next door. Between the two buildings was a narrow doorway (now marked 418), which led to a rooming house in the upper floors operated by Bessie Brewer. It was from a window in the second floor bathroom at the rear of the rooming house that James Earl Ray fired on King. Ray, an Illinois native and long-time criminal had, according to the FBI, been tracking King since mid-March.

According to prosecutors, Ray dropped a duffle bag in the doorway of Canipes Amusements as he fled the scene; it was found to contain a Remington rifle with Ray's fingerprints, a scope, and a pair of binoculars purchased by Ray just hours before the killing. In the confusion following the shooting, Ray managed to escape the city. A massive manhunt ensued before Ray was ultimately apprehended by British authorities in London while attempting to board a flight to Brussels.

J. Shelby County Hall of Records, 150 Washington Ave. The third floor of this building, formerly the Shelby County Jail, was converted to hold a single prisoner, James Earl Ray, upon his extradition to Memphis. It was a fortified cell within a cell (Ray had previously escaped from the Missouri State Penitentiary), with steel plates on the windows specially prepared at a cost of $100,000. It was here that Ray confessed to the assassination.

K. Shelby County Courthouse, 140 Adams Ave. Numerous union leaders and supporters of the strike were sentenced in the courthouse for a wide variety of offenses. It was also here that James Earl Ray pled guilty to the murder of Dr. King to avoid the death penalty. He was sentenced to life imprisonment.  After an escape attempt in 1977, Ray died in Brushy Mountain State Penitentiary on April 23, 1998, at the age of 70.